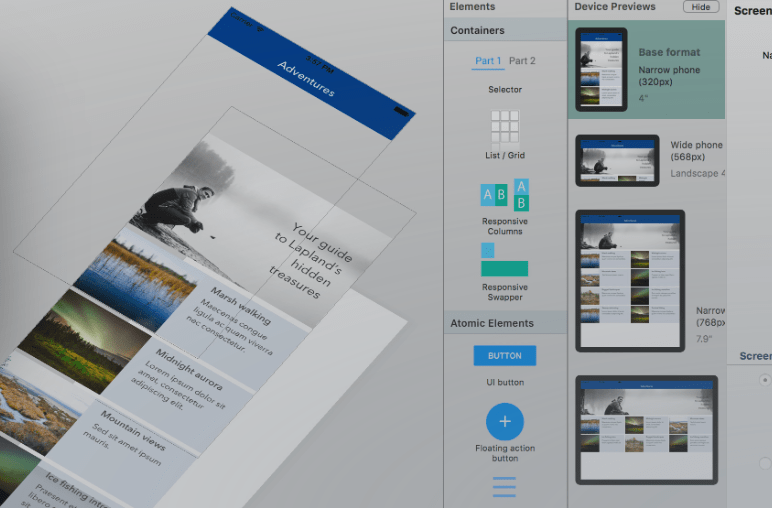 React Studio is trying to tear down the walls between the design and development. In other words, we can say that we can create apps flows and components, express their properties and data linkage visually. Once all these are done, we can export the code to the programmer’s editor. The exported code is clean and a complete ReactJS project with nothing extra. The same can go vice-a-versa, i.e., we can write the ReactJS component in code and later can be used in the React Studio as a design element with property UI and full roundtrip back to code.

The code inputs to the Design Compiler are plugins. It’s easy to create a plugin to represent a React component, a web service, a state transition. Each plugin has a UI which lets the designer modify aspects of the generated code — but only within the parameters you specified. Everything composes: if you want to make a component that lets the designer pick other components to be placed inside it, no problem.

React Studio is a rich design environment that gives you full control over high-level aspects of an app’s design. In React Studio you don’t draw a picture of a checkbox. You place a real checkbox, decide how it should fit in the layout, then connect it to some real data, make it interactive. In other words: create real apps, not just drawings of them.

It’s a bit more work than just drawing… But the results are so much deeper. And you can still keep using your favorite drawing tool: we have a powerful transfer plugin for Sketch that lets you control how layers are interpreted, so that e.g. a picture of a button in Sketch becomes a real button in React Studio.

React Studio reconciles the Business Reputation and Satisfaction under a new paradigm. Designs and code will flow in both directions in a controlled way. Designers use the Coe that has already been written, tested, and debugged to “assemble” apps. Endpoints can be changed for user acceptance testing on offline systems without rewriting code.

Assembled Apps are effectively production ready as soon as the business and the designers are happy with them, and can be changed up until the last second before deployment without risk of destabilization.

For more wonderful features and tutorials on how use this awesome app, please jump ahead and go to React Studio. Download it for FREE and start creating ReactJS apps.

Top 10 ReactJS Books You Should Read